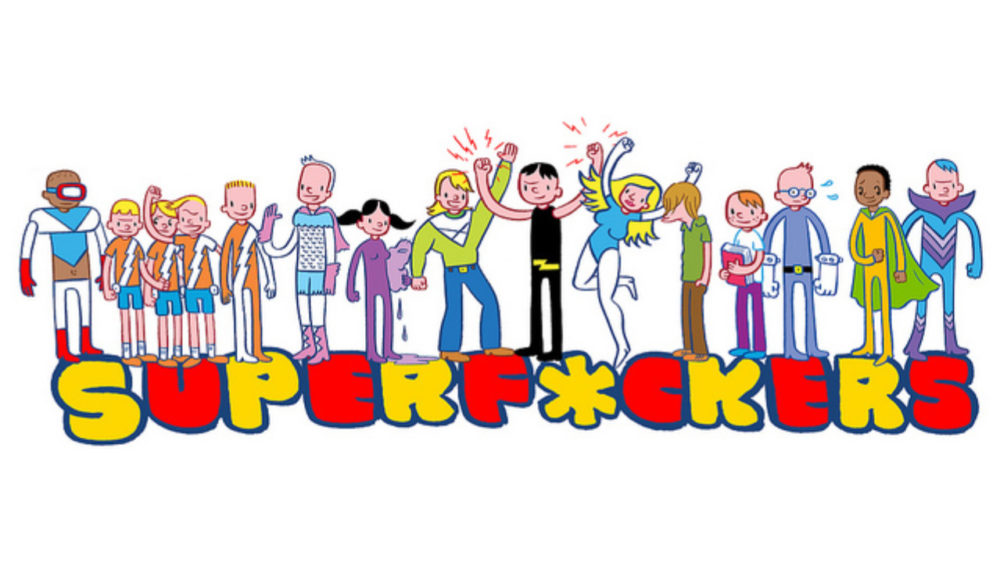 Contrary to what we’ve all learned from Spiderman, with great power comes no responsibility at all.

Based on his comics from Top Shelf productions, James Kochalka’s SuperF*ckers is an animated comedy satire about a bunch of superheroes who drink, smoke, swear, but do nothing super (except by accident). It’s like the wildest college weekend ever, with superpowers.

James Kochalka was Vermont’s cartoonist laureate from 2011-2014 and is the creator of the critically acclaimed and highly influential comic strip American Elf.

Praise for the SuperF*ckers comix

“Portrait of the Superhero as a Young Douchebag” —parabasis.typepad.com

“James Kochalka’s endearingly infantile take down of the spandex set. The F*ckers have their own clubhouse, amazing abilities, and fawning fans, but really they mostly just want to hang out, get high, and punch things… the point here is just screwing around and seeing what happens when a bunch of idiots can wear funny costumes and screw around with aliens.” — avclub.com

“Superf*ckers is full of teenagers with powers doing what teenagers probably would do if they had super powers: hooking up, finding new ways to get high off of slime and paint chips, getting into fights, calling each other names and doing just about everything aside from being heroic in any possible way… this isn’t your traditional comic.” — ugo.com

“(W)e encounter the team in a series of laugh-out-loud skits and sequences that send up, with glorious disregard for taste or decency, the teen superhero team genre with all the subtlety of a super-powered fart. Anyone familiar with the teen-superhero comics of the ‘70s and ‘80s will have a ball with Kochalka’s band of foul-mouthed, bad-tempered and wholly dysfunctional super-powered misfits.”  —The Crack